A sweet staff, kind crowd and great chats prior and after as well as blessed to bring the message at the Sunday service in Lapel this past weekend.

It rained off and on, but safe travels were had, Roy and Ed quite “on” Sat. night with a cookin’ set. So good to work with Daybreak Church and cool that so many of their staff had history with REZ Band shows back in the day.

Now happy to be home in Chicago- time for a shower and sleeeep. Tomorrow night I’m at Cook Co. Jail, Tuesday recording more and friends are having a wedding next weekend. Lot’s going on as usual!

As always, thanks for stopping by 🙂 -Glenn

Glenn Kaiser Band will perform for a fundraiser for Celebrate Recovery at Daybreak Community Church in Lapel, IN (1219 N. Main Street) on Saturday, September 28, 2019 at 7:30 PM.
Admission $20 -tickets available at the door
For more information, please contact:

There is nearly zero logic behind the comment that “God will take care of everything” therefore we people of faith can simply sit back and watch. If you really think that, don’t vote or bother with the condition of your teeth, lawn or place of work, just sit, pray -and watch what happens. God’s Word, for example The Book of James nails the foolishness of such a “faith”.

One of the old words we rarely hear these days- though the concept is presently being discussed a great deal -also happens to be a biblical term:

Definition? “The office, duties, and obligations of a steward, the conducting, supervising or managing of something, especially careful and responsible management of something entrusted to one’s care, example: stewardship of natural resources.”

Jesus spoke plainly of a steward in Luke chapter 16 and the concept is mentioned several times throughout scripture. He particularly spoke of the injustice of the steward and used rather intense, harsh terms regarding the treatment of the person.

15 Then the seventh angel sounded; and there were loud voices in heaven, saying,
“The kingdom of the world has become the kingdom of our Lord and of His Christ; and He will reign forever and ever.” 16 And the twenty-four elders, who sit on their thrones before God, fell on their faces and worshiped God, 17 saying, “We give You thanks, O Lord God, the Almighty, who are and who were, because You have taken Your great power and have begun to reign. 18 “And the nations were enraged, and Your wrath came, and the time came for the dead to be judged, and the time to reward Your bond-servants the prophets and the saints and those who fear Your name, the small and the great, and to DESTROY THOSE WHO DESTROY THE EARTH.”

The biblical Greek word translated to English “destroy” re. “those who destroy the earth” means “to change for the worse, to corrupt, minds, morals, to destroy, ruin, to consume of bodily vigor and strength, of the worm or moth that eats provisions, clothing, etc., to destroy, to kill”

When so many denounce, reject and blast environmentalists and scientists who speak to what we have done and are now allowing on our planet is there any wonder about what God Himself says via these elders? There is a reaping when lives are destroyed by billionaires, corporate shareholders and politicians who will not sacrifice themselves for the sake of position, power and their immediate financial gain to the tune of the health and sustainability of the planet. In a word, this is about personal responsibility.

I have mentioned before and expect I will again, that while some whine and scream about “the lazy, irresponsible poor” the same people rarely say anything about the powerful, moneyed irresponsible wealthy, those in position to make deep and true, positive change… but for any number of reasons just do not do so.

The cheap and frankly ignorant re-direct game is to cry “socialists, globalists and survival of the fittest you snowflakes, left-wing idiots” when someone speaks about such matters. And this coming from those who DO LITTLE OR NOTHING AT ALL… BECAUSE “It ain’t my responsibility”?!! Uhhhh… really? “To whom much is given much shall be required and to whom more is given much MORE shall be required.” Those are Jesus’ words.

Then there is the classic and skip-the-issues-just-trashtalk white-wash response “You’ve swallowed the koolaide” as if nobody on the political right ever does?!! Excuse me, but we’re ALL responsible to do with what God gives us as HE calls us to do, and that my friends is where biblical ignorance can literally cause people to suffer and indeed die.

I say many professing Christians hide behind “spiritual” talk devoid of either sense or love, a quasi-commitment to Jesus and His words when we cherry-pick scripture in such a way as to support our own lazy, irresponsible, indeed judgmental “Don’t judge!” one minute and “I’ll judge you here and now” the next.

If you really want an education, check out Revelations further on in chapter 18 when the prophecy tells us the merchants are freaking out because they can no longer make money as Babylon (you can debate who that is/was/shall be all you like, I will not) is fallen.

In the end- however and whenever He rolls the world all up (and He will), there will be those whom are destroyed as they themselves destroyed the earth for the sake of personal gain, power and with zero true commitment to God or their neighbor. Political position, bank accounts, a majority or minority view won’t be of much value when He does, and that day is coming.

Meanwhile, consider God’s Word and your neighbor, consider whether love and His truth is your deepest link to making decisions, then proceed with humility and caution because “We shall all stand before the judgment seat of Christ”.

Speaking in the practical sense, from the least powerful to the most powerful person on earth (whomever that may be at any point in time) we are ALL stewards of what God has given us, the earth and what’s on/within it. The greater the power to influence and affect it and people, the greater the responsibility.

As always, thanks for stopping by. -Glenn

It was sunny and warm Sat. north of Detroit at the Rally for Rocky, a sweet bro. who is now home with Jesus. Had a good turnout and cool moments with his Mom, Dad who came. Lots of BFC and other clubs attended, fun jamming w. two cool bros. (Love and Respect Pastor Z). God’s Dirt are so kind- and repeatedly rocked my speakers on the ride home via their new cd! I headed out right after my set cuz of the Sun. event -bit of heavy rain (no issues, I love rain).

Today (Sun.) attended a sweet outdoor service and Block Party at PilgrimFest in Chicago and sat in w. their team for the last tune. I did a set and featured my beautiful Wendi for the last song as the set had to be shortened as little bits of rain began to fall. The Jessie White Tumblers rocked it in the street… so talented! But it was all amazing, again great crowd, food and kind, kind folks over on Winchester Ave. at Pilgrim Lutheran Church and School.

Ok, GKB blues/rock north of Indy this coming weekend- the show Sat. and I speak Sun. a.m.. All our shows posted at GrrrRecords.Com/Shows  (as well as here at glennkaiser.com if you search for Appearances or Shows).

As always, thanks for stopping by! -Glenn 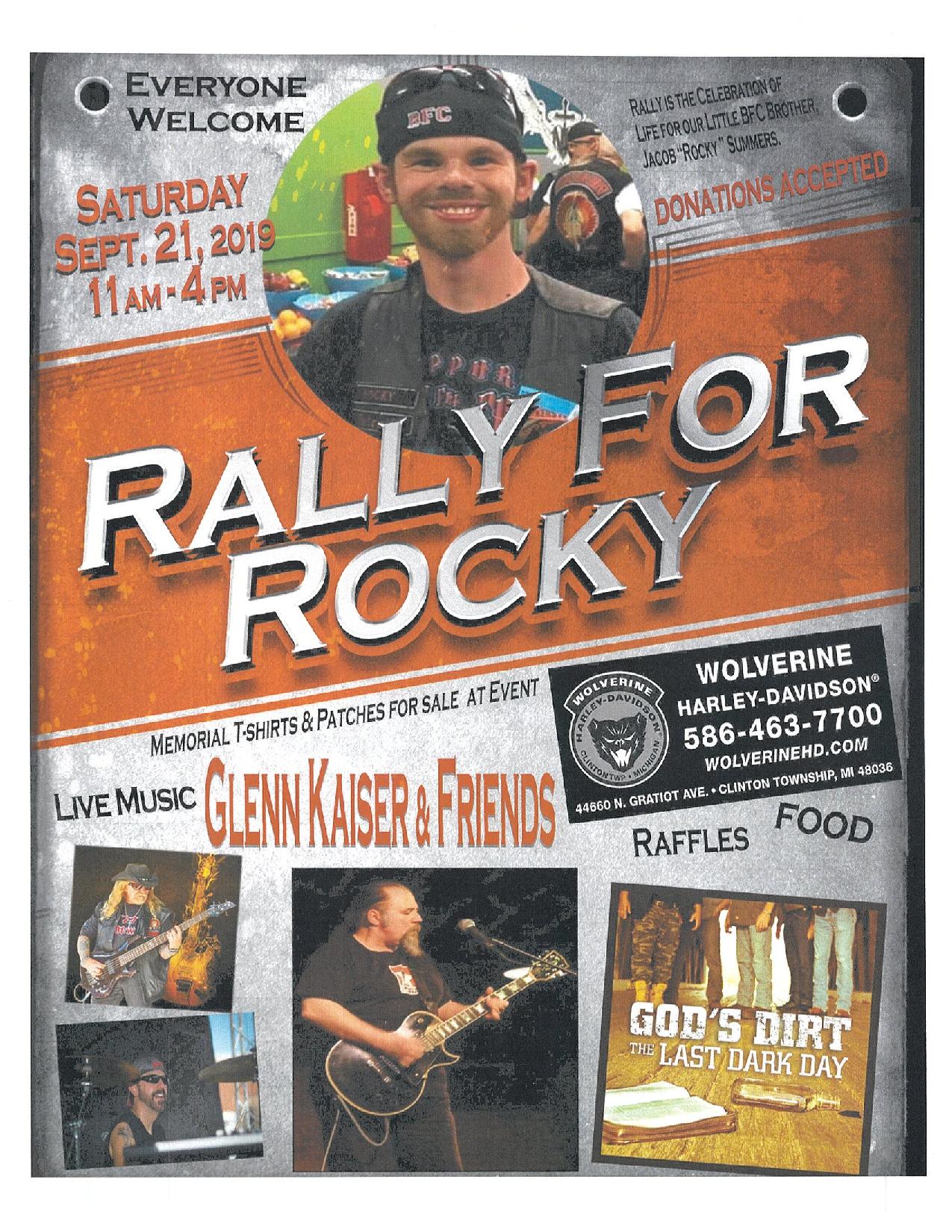 Another rockin’ weekend! GKB went up I-94, overcast light rainy weather broke into sun, a lot of folks came out to the park, the brats (that’s bratwurst to those who don’t know…) kraut and mustard were tasty and the people were sweet right through our stay in Hudson. The opening band cooked and we had a few folks up and dancin’ too.

Kudos to several churches who made it happen and included a number of really worthy organizations who shared about needed, caring services they offer in the area.

Oh- and the cheese curds weren’t bad either 🙂

So this coming weekend I bring mostly electric blues, jamming with friends in Clinton Township (north end of Detroit, MI) as well as God’s Dirt band at Wolverine Harley-Davidson for a Saturday afternoon set (see post in Appearances in this site or at http://www.grrrrecords.com/shows  for details), then a Sunday afternoon set at Pilgrim Lutheran (solo blues and some unplugged tunes with Wendi) here in Chicago.

Enjoy autumn and hope to see you at a show if you’re up for it.

And as always, thanks for stopping by. -Glenn