That was the phrase one of my wife’s elementary school teachers kindly and respectfully used when she referred to she and her classmates in those early years of school. My said they all knew that teacher loved her students -and they loved her.

My unscientific guess is 80 percent of the human race is a fair bit insecure and often feels less than secure in their significance than they/we let on. There is a real sense in which we are all little people even when on several levels, we may not be so small.

A dear friend spoke on this with great precision this past weekend. He and his wife are two of my personal heroes working as so many others in our homeless shelter. Such volunteers’ (and those they serve) names are not exactly world-famous.

In that I’ve spent most of my life doing shows, speaking, traveling much of the planet and recording nearly 40 records plus -along with a pretty large internet presence, some might figure me fairly “known”. On the weekend I had accepted an invitation to sing a couple songs prior to Jeremy’s message and afterward a number of folks brought no small encouragement my way.

Like being spiritually born, mega GRACE from God in His providence gave me the ability to sing. In the practical, DNA from Mom and Dad, no lessons. I just sing. I did not earn it.

In plenty of areas of my life (including musicianship and oratory) I tend toward insecurity just as others do who struggle with music-making and public speaking.

See, the burden of talent and even spiritual gifts is “To whom much is given, much shall be expected”. We all fail- regardless. Plus, those with great talent or rather obvious gifts are often lauded and applauded to the extent they become arrogant, prima donnas, sometimes quite unloving and judgmental toward others who seem to lack such talent and gifting.

The ultra self–confident are often in a battle that the 80 percent don’t fight.

These as well as the so-called “least of these”, and those of us who struggle with self-worth or a sense of personal lack often forget the following words of Jesus:

“Every valley shall be filled in, every mountain and hill made low…” Luke 3.5a

Nobody and I mean NONE of us live worthless lives without value simply on the basis that God does not view or judge us as we judge ourselves: imperfectly.

Jesus did not suffer all He did for you and I because we are insignificant losers- regardless of natural talents, skills, spiritual gifts or what we or others may judge useless or “minor” gifts. 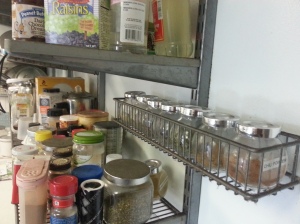 We have a massive, hugely stocked spice and cooking rack in our community kitchen. The little salt shaker may seem lost up there but without it nothing cooked would be savory -and every meal a fairly bland without it. Some would not know exactly what was missing… but I suppose this is why God made salt.

He created you and me, with and/or without gifts X, Y, Z, with or without this or that skill set. And yet Jesus said (my CAPS for emphasis): “YOU are the salt of the earth.” Matt. 6.5a

Let Him shake us where, when and as He will.

Your “little” is so much more than you suspect!

As always, thanks for stopping by. -Glenn