Here’s a fresh one-string Diddley Bow. I must say I’ve built these before but this is my fave so far… inspired by One String Willie, a new friend I met this summer at the Cigar Box Guitar Festival in York, PA. They were nice enough to invite me back in 2013 so Lord willing I’ll be there again!

Anyhow, this is simply part of a Blind Willie Johnson tune taken straight into my HTC Droid Incredible phone via camcorder program. No nice mic, nada.

Two important points, and I’m in no way lying: the cross behind me wasn’t something I planned on being in the shot, nor was the phone sliding off it’s mount (on top of a can from canjo in front of the diddleydow) at the exact moment I was singing the lyric “God’s on the floor”. I’ll let you figure that one out.

Ha. Here are some still shots of what I’m playing and the vid clip as well.

This IS about as simple as it gets re. one-string slide guitar… a small section of dowel rod as a beater, a couple hot sauce bottles (one for a “bridge”, one for “slide”) 2 nails into trash 2×4 and a hunk of the 2×4 as a “nut”. You take a wound (in my case, I like lower sounding strings mostly for these things) acoustic guitar string and wind it on. I added a couple drywall screws to hold the “nut” hunk of wood tight.

As always, I figure out where my main notes are and mark ’em with a sharpie marker. Go.

No pickup on it yet, but there will be. Tuned to an A but I frankly don’t recall what gauge string it is… sorry!

Oh- “Diddley Uno” cuz some nice folks selling bbq and hot sauce gifted me with a bottle at the York Fest. Made a groove in the 2×4 and put their hottest “Cuban Missle Crisis” bottle tight in there for a bridge. Left a little sauce in case I’m ever in need on a gig!

I wrote this late at night a couple nights ago. I’ll post more pics in a bit! Thanks for stopping by, -Glenn

Tonight I lie on a warm sleeping bag listening to the surf and wafts of wind blowing in through the woods on the western shore of Lake Michigan here in northwestern Indiana.

Several of our students and staff are quietly chatting around the campfire and both myself and my (shared) tent are scented by woodsmoke. I like it. Earlier a bro. and I talked about camping and I recalled one of many such experiences with a long lost friemd. We had gotten caught in a hard rain, flooding and mudding us out in only one short night that time. The campout I’m writing from tonight is with our Project 12 discipleship group and the weather is nicely dry and cool. One never knows how the weather- or people… might change. The power of God”s love and truth of His Word, honest and open fellowship all help to weather any storm. Then again, some may resist any or all of these and the results are washouts and mud.

So… like “living stones” that make up part of the Lord’s house.

There is promise among these brothers and sisters. We will keep the fire lit. 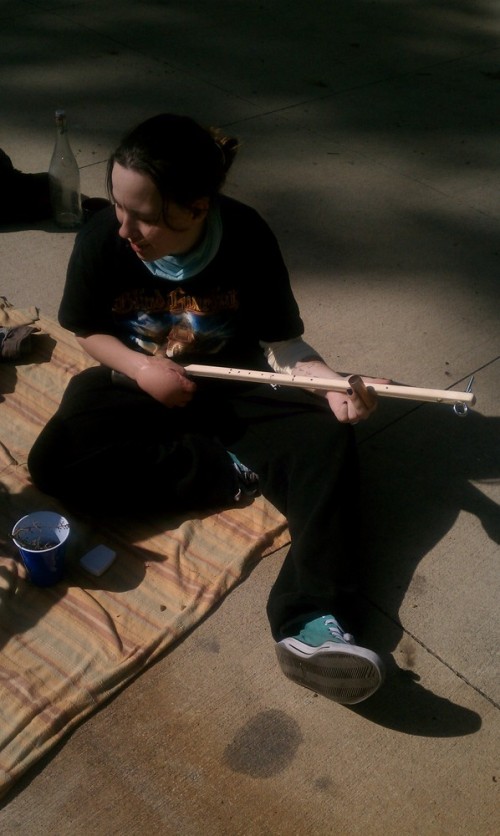 I admit to several obsessions-

Seeking to follow Jesus, live more in and better reflect His love, Linux operating systems (especially very small “live” Linux distros), cigarbox and found-object 1, 2 and 3 string guitars, blues music and all things pertaining to integrity to the best of my ability. I also admit to loving very hot, well, Extremely hot peppers. Which brings me to the new pic I’ll keep on my site here for a while. A dear bro. in the Lord (Pastor Dave Eden of Bushnell’s First Baptist Church) has been growing these things for years. We link up for a bit of fellowship from time to time, and I recently was in town on a day he sadly was not. BUT… he is always sharing his rocking and often imported peppers and his home-made salsa (I mean FIRE starting) with me and has told me to just come by and pick ’em. So last week I buzzed his house and in the front he has several bushes that were calling my name. So you see, this pretty little cooker ended up as my new pic for awhile. I try to speak, sing and write stuff that will at times be admittedly hard to take… but hopefully clean out the system and cause people to sit up and put up rather than simply wag tongue. Nobody who eats any of Pastor Dave’s peppers or sauce will ever quietly, passively sit still. I sure can’t! Indeed, it ain’t for everybody… neither am I nor is my delivery always suitable for just any/everyone… but for them that dig it… some indeed like it hot! Thanks for stopping by 🙂 -Glenn

Our Bible & discipleship group began with The Gathering, the P12 opening week of prayer, sharing, teaching, camping, fun activities, worship and getting to know one another in community.

Thanks for prayers! -Glenn 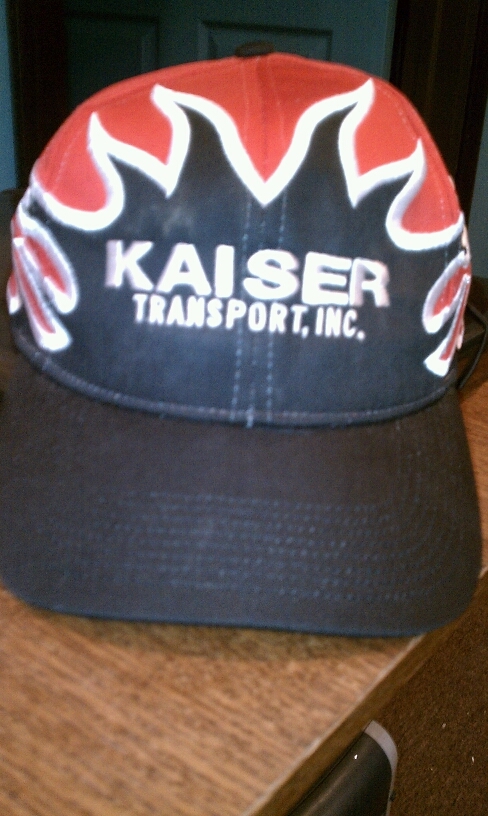 So I spaced on uploading the cap I wrote about… Ha! Here it is 🙂
-Glenn

A while ago a friend was passing through Chicago- it seems I was out
of town at the time and he went ahead and left me a present… which
you see here.

Funny enough, my father drove truck for years (eventually was called
to management) in what was one of the most prestigious logistics
companies in the U.S. at the time. Many years later my brother also drove truck for what was -then- one
of the largest, most respected trucking companies. So my passing visitor buddy left me this cap- which came in handy
today as it’s raining here in Chicago. I love rain… and I also love
taking people places, spiritually, emotionally, hopefully even
intellectually at least to a degree. The Scriptures tell us this about Jesus: “the common people heard Him
gladly”. Why? Likely because he spoke in language that they readily understood. God
the Son was very much -at least in the sense I’m speaking here- “one
of them”. What He said and did was all about love, all about truth,
all about authenticity. From the record, He was/is anything BUT
pretentious. The popular song of several years ago asked “What if God were one of
us?” and there is in a sense- that fact that though He is quite unlike
us… He also came into His created world in human form very much like
one of us. Amazing, this “incarnation” stuff! But as I smiled at the cap the bro. gave me, I had to ask myself
“where are you taking people”? What witness -for or against, closer to
or farther from, benign or actually affecting others with Jesus and
His Good News? Do they see and hear a genuine disciple, a
listener/learner of Christ? I’m not asking the question “where do you want to go today” but rather
“where am I trying to take people today”. Who are you following and
exactly where is it they’re taking you? Super-important question
chillun!! Most of my life has been spent as a musician. It seems people are
“transported” by me (and all who read this…) in terms of influence.
Not all the time, but often. Where am I taking you? To WHOM am I
nudging you? I ask you to consider these same questions with regard to your own
life, music, writing, speaking, prayers… everything. I don’t know anything about Kaiser Transport but I like the vibe. I
trust they transport with commitment and caution. That’s my aim too 🙂 Thanks for stopping by! -Glenn

Been thoroughly enjoying my One String Willie cd and getting to know
him as a person has been cool.

We sat and chatted at the York Cigarbox Guitar Festival but somehow I
didn’t quite know who he was- except for being an obviously nice guy.
Then he offered me a diddly bow he’d made earlier in the day as a
demonstration model he creates so people can learn how to build
them… and I realized who he was! I’m a tad slow sometimes. I thanked him and told him I’d made ’em, had
so many at home I didn’t think it wise to bring another or I’d have
snapped it up then and there. So we’ve had email exchanges (thanks Shane Speal!) and that cd is
spinning (along with his songs in my head) every time I drive
somewhere. Really fun- and edifying as he’s a
believer as well. Like others, Willie found a way to be creative, carve a niche he’s
found a good fit for himself and also through which he can share with
-and encourage- people. If you know me you’re likely aware inspiration is a major part of my
quest and hopefully part of what I can pass on to others. A few nights ago Willie’s music inspired yet another creation: a
one-string “canjo” I built and put a bit of decoration on, all in
about an hour. He normally uses a one-strung “diddly bow”, just a 2×4 with a tin can
and pickup on it. Well, he sometimes uses a one-string cigarbox guitar
and others I suppose. So tonight I decided to use a 3/4 inch piece of
dowel with an Allen’s Hoppin’ John can from the previous night’s
supper. Nice blues vibe! As in life, “sometimes you only got one string”. The issue is not what
you have but what you do with it. How creative can you be? God often moves me to step out of my comfort zone into a -new- sort of
comfort zone… one that includes fresh challenges and situations
where using what I’ve already got in a more thoughtful way brings me
satisfaction as well as seems to really bless others. Jesus is all about loving us and loving others through us. Believe it
or not, even a stick, can and string can bring a song and even be a
see-and-believe example of grace. And of course, recycling 🙂 This little one-string canjo is strung with an acoustic, wound G
string that I’ve tuned to a B. I got out the magic markers I had on
hand and found the key notes where I then marked it up for positions
to place the slide- which is from a piece of metal conduit I cut and
polished fairly smooth. Nothing like the old eyebolt & wingnut tuner. I used a small wood
screw-wingnut combination for a “nut” and a wingnut-flathead screw
combo for a “bridge”, drilled a small hole right through the can in 3
places. Two are for wood screws to hold the can in place on the stick,
one is closer to the bridge where I then feed the string right through
the can and neck and then through the slot in that flathead screw,
then up over the wingnut by the tuner and the rest is practice! I -may- put a pickup in this thing. The sound is really quite nice and as I placed the neck at a slight
angle I find it doesn’t need a string or strap for me to comfortably
hold and play it. Wendi (my wife, originally from the South) truly knows how to cook…
and that there Hoppin John mix was good along with the ham and brown
rice all slathered in her to-die-for low-carb gravy, garden tomatoes
and watermelon. Certain inspiration 🙂 Thanks for stopping by! -Glenn 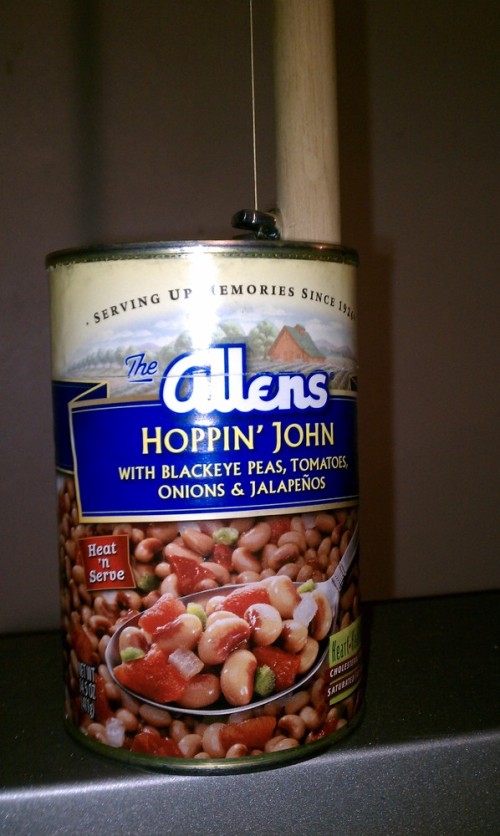 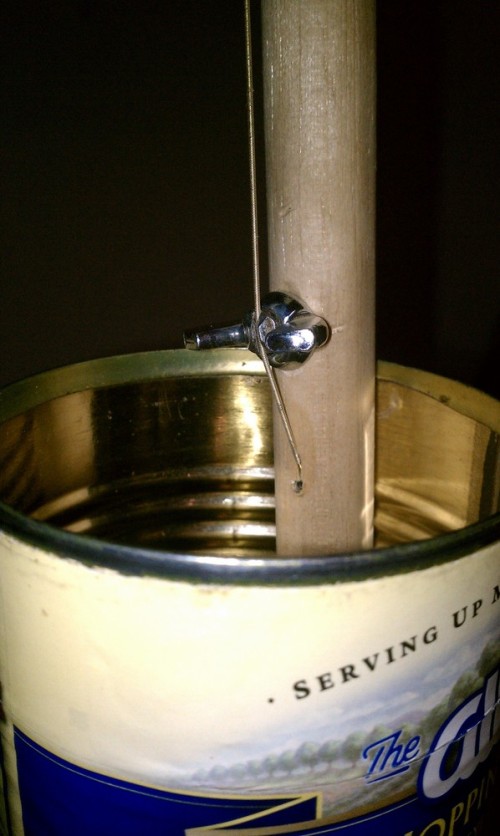 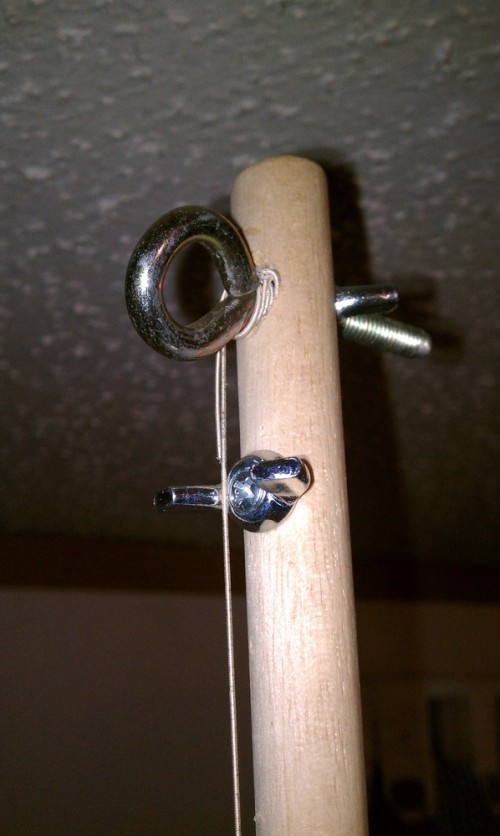 Saturday, September 15 I’ll bring solo blues and a message (with a
local band or two) at Wappapello, MO Day of Recovery. I’ll be featuring cigarbox & found object guitars in each set. Let’s
rock authentic! Hope to see some of you there and thanks for stopping
by 🙂 As always, check http://www.grrrrecords.com in the Shows section for
all the details for each show and service. Yours,
-Glenn